Pelvic floor physical therapist shares 5 things she never does, from hovering over public toilets to kegels.

Giving birth comes with enough challenges. Pelvic floor rehab shouldn’t be one of them.
Dr. Marcy Crouch
|
Posted on
December 16, 2022
|

Do you leak urine since giving birth? Or have you felt pain during sex after delivery? You're not alone — even if it feels that way.

Marcy Crouch, board certified women’s health physical therapist who has a doctorate in physical therapy, tells TODAY.com that after more than a decade in the field, she knows just how common experiences like these are.

"I’ve had the opportunity to work all over the U.S. and in multiple types of clinics, from owning my own cash-based clinic in Los Angeles to a hospital-based rehab facility," Crouch says. "The one thing that almost every woman and mother has experienced or heard is ... they were not prepared for birth, they didn’t know anything about their pelvic floor muscles, and they felt alone, dismissed and forgotten once the baby was born."
‍

‍Pellvic floor dysfunction, like leaking urine or pelvic organ prolapse, occurs in one in four women, and nine out of 10 women experience pain the first time they have sex after having a baby, Crouch says.

“These issues don’t go away on their own, profoundly affect a woman’s life in all aspects — motherhood, socially, romantically, career-wise — and oftentimes these women are told it’s normal, it’s what happens after having a baby, and to deal with it,” Crouch says.

That postpartum pelvic problems are so often dismissed inspired Crouch to create "The Down There Doc," an online resource to learn from a trusted expert, while also giving them permission to talk about these issues without shame or judgement.

"I think a lot of these issues are taboo and hard to discuss for a lot of women for a lot of reasons," Crouch says. "It doesn’t help that when we try to bring something up that is so vulnerable and intimate in an already rushed appointment, just for it to be dismissed as normal."
‍

5 things I never do as a pelvic floor physical therapist

I never do kegels while sitting at a red light.

"We are told constantly, and incorrectly I may add, that we should be doing hundreds of kegels a day to fix all pelvic floor issues under the sun," Crouch says. "Most commonly women are told, 'Oh just do them every day, every time you’re at a red light! So easy!'"

"Our pelvic floor has to work dynamically and functionally throughout our everyday life, not when we are sitting still without any demand on the muscles," she explains. "If you were exercising your arms, you wouldn’t do hundreds of bicep curls every day while standing still, right? Same for your pelvic floor. The principles of muscle and exercise physiology apply down there also."
‍

I never blow my nose while going to the bathroom.

When we sit to go the bathroom, our pelvic floor muscle releases tension and stops contracting so that the urine and stool it’s been holding in can empty, Crouch explains.

"The muscles are not on during this time, which is correct. However, if we blow our nose while peeing or evacuating stool, it’s a lot of pressure straight down on the pelvic floor," she says. "This is like a big push down on the floor of the core that isn’t supporting the organs like it usually does."

As a result, this behavior can contribute to prolapse, hemorrhoids and weakness of the pelvic floor, Crouch says. 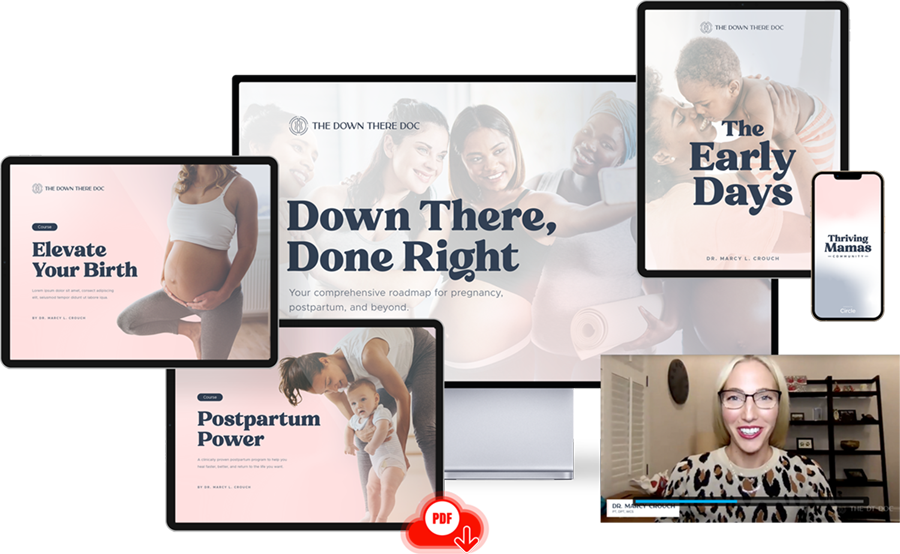 Down There Done Right

I never poop without my feet supported.

Using a stool or squatty potty while having a bowel movement elevates your legs, placing your knees higher than your hips.

"This mimics a squatting posture, which is the best position for pelvic floor muscle relaxation, which is what we need to evacuate our bowels," Crouch says.
‍

I never hover over a public toilet seat.

"Hovering over a toilet seat actually engages your pelvic floor muscles and your core, which makes it harder to empty your bladder and bowels," Crouch says. "Use toilet seat covers, toilet paper, Lysol spray and wash your hands really well after. Your pelvic floor will thank you."
‍

I never equate "common" with "normal," and I don’t accept the status quo for women and birth recovery.

"Because so many women are living with and dealing with pelvic floor muscle dysfunction, it is often dismissed as 'normal' and ignored," she says. "Even though women and mothers are dealing with lifelong physical affects from pregnancy and birth, that would not be considered normal prior to being pregnant."

Known as The Down There Doc on Instagram and TikTok, Dr. Marcy Crouch is a board-certified women’s health physical therapist working to elevate pregnancy and postpartum care for women everywhere.

👉 This article originally appeared on today.com. Click here to read it in its original form.

Down There Done Right

#MomCrush Monday: Meet Dr. Marcy Crouch, Founder of the Down There Doc

Get to know more about Dr. Marcy Crouch through a short interview from the popular site Modern Mom Probs.

Painful Sex After Giving Birth and How to Fix it

3 reasons why sex may be painful after birth and the most effective ways to combat it (from a Pelvic Floor PT).

Learn how pregnancy and labor impact your pelvic floor muscles and what you can do to prevent/heal from symptoms of pelvic floor dysfunction.